skip to main | skip to sidebar


My wife's Aunt is retiring to Lake Chapala Mexico. And guess who volunteered to drive down to Mexico with her? :) 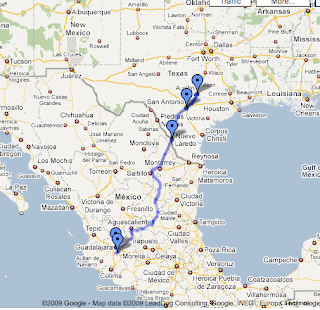 We motored south through a surprisingly green Texas landscape and in 2 hours we were in San Antonio. We found a parking lot in what looked like a relatively ordinary Texas city and made our way to the Riverwalk where we were blown away by what lay one story below street level.
The Riverwalk definitely lived up to it's billing. It's beautiful. When you climb down the stairs to the river you enter a completely different world of water, verdant vegetation and majestic trees. Both sides of the winding U shaped river that snakes it's way through downtown San Antonio were full of restaurants, bars, clubs, shops and hotels. 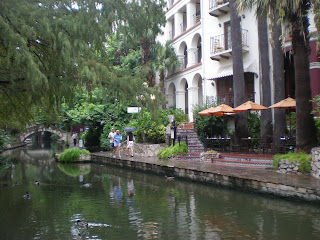 What really surprised me was how private it all was. Driving through San Antonio you'd never know the river was even there. You really have to descend down into the Riverwalk to see it. I'm sure back in the day the river was simply a dirty old back alley waste receptacle of a gully.
Now the river is lined on both sides with wide sidewalks and grimy rear basement walls are now beautiful and inviting places to linger or shop.
The Alamo on the other hand was a bit disappointing. I thought it would be a historical museum kept as it was 1836 when General Santa Anna and his Mexican Army crushed a lowly group of feisty Texian supporters including legends like Davy Crocket and Jim Bowie. Instead the Alamo grounds are now a beautiful park-like compound and the icon that is the "Alamo" building is actually a memorial chapel whose exit door puts you on a path to the gift shop - which was actually full of historic Bowie knives - pretty cool....ok yeah, I bought a gift, a mini Alamo. 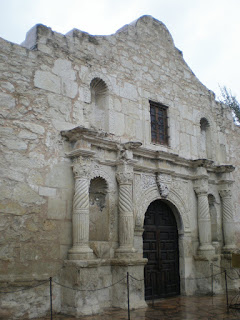 What to do? Back to the Riverwalk for some Mexican food and Margaritas. We were clearly closer to Mexico as the Mexican population became ubiquitous - and - most importantly we encounter our first Mariachis! 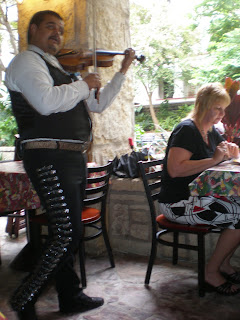 Check us out in moving pictures!

Next, we cross the border at Nuevo Laredo.
Posted by Bob Welch at 2:55 PM

When I did my Air Force Basic Training at Lackland AFB in 1966, The river was filled with trash, dead cars and old tires. nice to see that it's been transformed.

I just love reading about our trip!
Thank you so much for driving down with me. You are definitely the best nephew-in-law anyone could have!
Love you, Tia Dorothy Bob is a travel writer and designer/ producer of interactive entertainment. He's traveled through Europe, North America and Australia. Bob loves immersing himself in local cultures and writes about the food, drinks, architecture, music, history, people and experiences along the way.